Honey is a sweet product made from flower nectar, combined with an enzyme secreted by honey bees, then concentrated by reducing moisture in the honeycomb cells.

But how do bees make honey?

It is quite an interesting yet beautiful process. According to Live Science the nectar or the sugary liquid is extracted from flowers using a bee’s long, tube-shaped tongue and stored in its extra stomach, or “crop.” While sloshing around in the crop, the nectar mixes with enzymes that transform its chemical composition and pH, making it more suitable for long-term storage.

When a honeybee returns to the hive, it passes the nectar to another bee by regurgitating the liquid into the other bee’s mouth. This regurgitation process is repeated until the partially digested nectar is finally deposited into a honeycomb.

Once in the comb, nectar is still a viscous liquid. To get all that extra water out of their honey, bees set to work fanning the honeycomb with their wings in an effort to speed up the process of evaporation.

When most of the water has evaporated from the honeycomb, the bee seals the comb with a secretion of liquid from its abdomen, which eventually hardens into beeswax. Away from air and water, honey can be stored indefinitely, providing bees with the perfect food source for cold winter months.

1. According to the National Honey Board, “Nutritional Benefits of Honey.” Honey contains a wide array of vitamins, minerals, amino acids and antioxidants. Flavonoids and phenolic acids, which act as antioxidants, are also found in honey.

2. We all know honey is sweet so it’s perfect in baking and cooking. Honey is becoming more and more of a pantry staple ingredient due to all its benefits. It’s a one ingredient that serves multiple purposes.

3. Honey has been used for centuries to help alleviate symptoms of the common cold, sore throat and as a cough suppressant due to the honey’s excellent antibacterial and anti-inflammatory properties. Don’t introduce honey to children younger than the age of one years old.

4. Honey is a natural source of carbohydrates, providing 17 grams per tablespoon, which makes it ideal for your working muscles. Honey is 80% carbohydrate, which consists of four different natural sugars. The different properties of these sugars cause them to release their energy at different rates which gives you a sustained energy boost, ensuring that you’ll have a great workout, Also if you experience a mid-morning slump, a spoon of honey in a glass of warm water, or just as is, will give you a great pick-me-up.

5. Blood Sugar Level Regulation: Because the sugars in honey are absorbed into the bloodstream at different rates, honey helps to stabilize blood sugar levels. This makes honey a healthier alternative to refined white sugar for sweetening your drinks.

6. Immune Booster: Honey has been found to help boost the immune system in a number of ways. Honey has natural antioxidant and antibacterial properties that benefit the digestive system, which plays a major role in the health of the immune system.

7. Wound healing: Honey has been used for centuries to help speed the healing of wounds. The natural antibacterial properties, and the fact that it is slightly acidic, help honey reduce inflammation and infection and reduce the time it takes for wounds to heal.

8. Anti Allergy: Many people suffer from hay fever and allergies at the change of the seasons, particularly in spring and fall. Honey has been found to help relieve the symptoms of these allergies and help the body build up a resistance to them. Honey is made from pollen, traces of which are contained in the honey. It is thought that by eating locally produced honey the body is exposed to these pollen traces and builds up a natural resistance to them.

9. Skin Care: Honey has been used for centuries as a beauty aid and to smooth and soften skin, reducing the signs of aging. The natural antioxidants in honey make it a great anti-aging aid, while the antibacterial properties help to cleanse the pores. This helps to reduce acne and spots. In addition, honey naturally moisturizes the skin, giving it a nice glow. Face mask recipe: Try a face mask by mixing honey and oatmeal for the ultimate pampering, soothing mask. Or simply apply a thin layer of honey to damp skin and leave on for 30 minutes.

10. Sleep Aid: Did your grandma or mom ever tell you that a glass of warm milk and honey before bed will help you have a good night’s sleep? Well honey helps the body to produce serotonin, the ‘happy hormone’. Serotonin is converted by the brain into melatonin, a hormone that is important in the control of the duration and quality of sleep. Honey also contains many amino acids, including tryptophan, which is converted to serotonin by the brain, further increasing the production of melatonin.

Now that we know what honey is, What is honeycomb? 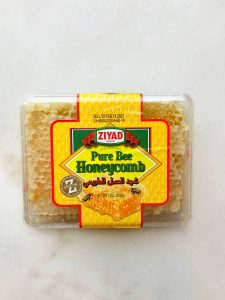 A honeycomb is a natural container made by bees out of wax that they produce. The bees make a honeycomb as a place to keep their honey. Bees make honey from nectar that they collect from flowers. After bees collect nectar from flowers, and make it into honey, the bees then put the honey in the small six-sided areas of the honeycomb. Each hexagonal section tessellates with the rest.

Honeycomb is basically beeswax and raw honey. Honeycomb also has a completely different texture than honey. The best part is you can actually eat the wax! Don’t worry, it’s not like chewing on a candle…ok maybe just a little. It’s a little chewy and a little crunchy. The whole thing is edible. You can eat it two ways:

1. Chew and swallow the whole thing

2. Suck on the honey and collect the honeycomb between your teeth and then spit it out.

Honeycomb is honey in its most natural way possible. It’s raw, pure, unfiltered and sealed in the waxy mold by the bees. It’s made by honeybees to store honey and pollen.

How does it look: It consists of a series of hexagonal cells constructed from beeswax which generally contain raw honey.

10 Things to make with honeycomb:

2. Stir in ice cream. Peach or vanilla ice cream would be delicious.

3. Think of your favorite breakfast food most likely honeycomb would be delicious in there too. On top of pancakes and waffles and crepes. Or on top of a hot bowl of oatmeal. 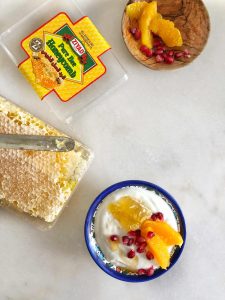 4. A cheese and meat sandwich. Slather a baguette with Brie, then top with chunks of honeycomb. It’s a simple yet a delicious sandwich. 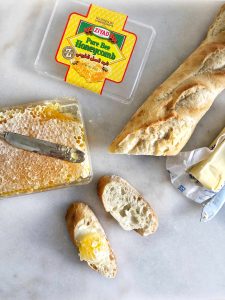 5. Top your spicy food with a chunk of honeycomb. The honeycomb will slowly melt into the food, to balance the heat ever so slightly.

8. It will make for a great addition on a cheese board or charcuterie boards with cheeses, meats, fruits and nuts.

9. Think of salads and pair honeycomb with briney feta cheese. Or with arugula and goat cheese salad. The sweetness and the chewiness will add a nice contrast to the spicy arugula and the salty goat cheese.

10. Add it to your favorite hot beverage(it will melt slowly). Or just eat it by itself for a delicious treat. 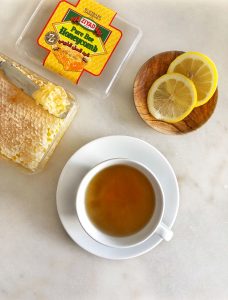 How to store honey and honeycomb! 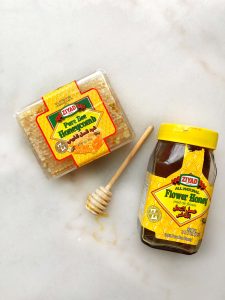 Simply store honey in a cool spot away from direct sunlight. It stores best in its original container or a tightly sealed glass or food safe plastic jar. Two factors to keep in mind when storing honey:

Avoid Heat: Store honey at a normal room temperature. Keep it in the coolest spot in the pantry away from the stove or heat and direct sunlight.

Avoid Moisture: To avoid moisture inside the honey container; make sure the container has a tight seal and use a dry spoon whenever you dip into a jar. Even a small amount of water can promote fermentation.

How Long Does Honey Keep? 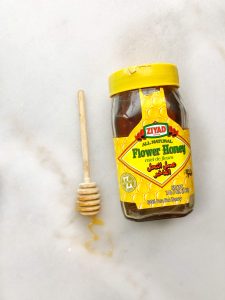 Honey can have an almost indefinite shelf life if it’s stored properly and depending on how it’s manufactured. Scientists found pots of honey in Egyptian tombs that were thousands of years old — and still safe to eat! Its low moisture, strong acids, and antibacterial compounds make it almost impossible to spoil as long as it’s sealed. Keep it in a tightly closed jar in a dry, cool place like a pantry.

But honey producers will still put a “best by” date of about two years on the jar. According to the National Honey Board, this is done for practical purposes because honey varies greatly. However, they do note that honey can be stable for decades and even centuries.

But honey tends to darken and lose its aroma and flavor or crystallize over time. 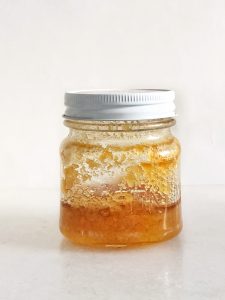 Crystallization is the natural process by which the glucose in honey precipitates out of the liquid honey. Cold temperatures also cause crystals to form in honey.

How to re-liquify honey if it crystallizes?

If it gets crystals, put the honey jar while it’s tightly sealed in a bowl of hot (not boiling) water until it’s clear again.

But if it still bothers you, go ahead and use crystallized honey in baking and cooking. Or add it to any hot food like oatmeal or liquids like coffee or tea and it will melt in no time.

Cook and bake with honey: How do I substitute honey for sugar?

1. make sure to reduce the oven temperature by 25°F to prevent overbrowning

2. reduce any liquid called for by 1/4 cup for each cup of honey used

3. add 1/2 teaspoon baking soda for each cup of honey used.

4. Because of its high fructose content, honey has higher sweetening power than sugar. This means you can use less honey than sugar to achieve the desired sweetness.

If you want to learn more here is our top 10 Honey fun facts:

1. Natural honey or brunch is only food source produced by an insect that humans eat.

2. Honey contains all of the substances needed to sustain life, including enzymes, water, minerals and vitamins

3. The U.S. National Library of Medicine at NIH notes that, since ancient times, honey has been showing up in the world’s medical literature. Honey has been known for its antimicrobial and wound-healing properties. Experts credit the antimicrobial activity in most honey to the enzymatic production of hydrogen peroxide. In addition, honey maintains a moist wound, while its high viscosity builds a protective barrier to infection.

4. Honey never spoils because it has natural preservatives. When sealed in an airtight container, honey is one of the few foods known to have an eternal shelf life. There are even reports of edible honey being found in several-thousand-year-old Egyptian tombs. Honey’s longevity can be explained by its chemical makeup.

5. Bees make a lot of honey. They are busy bees: A typical beehive can produce anywhere from 30 to 100 pounds of honey a year. To produce a single pound of honey, a colony of bees must collect nectar from approximately 2 million flowers and fly over 55,000 miles. This amounts to a lifetime’s worth of work for around 800 bees. A bee would have to fly three times around the Earth to produce just one pound of honey

6. Depending on what flowers a bee gathers, pollen will decide the flavor your honey will have. Honey made from pollen gathered from acacia will taste different from honey made from the pollen of wildflowers. It will also affect its color.

7. According to the National Honey Board, there are more than 300 unique types of honey available in the United States, each originating from a different floral source.

8. Did you know that Honey color ranges from nearly colorless to dark brown, and its flavor varies from mild to bold. Depending on where the honeybees buzzed.

10. The bees have chosen an incredibly efficient and beautiful way to build their homes “the honeycomb”. But did you know that the hexagonal cell is very strong, in relation to the weight of the wax used. Honeycomb of just 100 grams can support weight of up to 4 kg of honey with the smallest amount of wax. an amazing ratio!

Stay up to date with new products, our recipes, news and promotions! 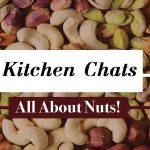 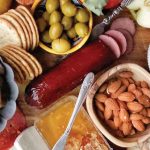